Last year, we announced our search for visionary entrepreneurs building enterprise startups in six strategic themes. At the same time, we also knew we needed a systematic way to make effective startup selection decisions and drill down on the specific problems that these broad areas encompassed.

After several experiments, the answer to this puzzle turned into Engage’s recently launched Working Groups. Each Working Group has functional experts, innovation leaders, and executive champions from our 14 Fortune 500 corporate partners alongside leading Georgia Tech researchers. Here is what quickly emerged from seeing 60+ corporate executives and GT faculty across four Working Groups in action:

From day one, Engage’s goal has been to strengthen the connective tissue that binds the startup ecosystem, category-leading Fortune 500s, and academia. Thanks to our highly engaged partners, and now these Working Groups, we are adding to the growing momentum in the ecosystem (over $4B in funding raised by Georgia startups).

We are in the final stages of confirming startups that will join Cohort 9 this Spring (to be announced shortly). If you are (or know of) a startup building the next big enterprise technology, drop us a line.

💎 Highlights from our Portfolio

Verusen raised $25 million in Series B funding to grow its footprint and build out its AI-driven technology platform.

Goodr was featured in Forbes and founder and CEO Jasmine Crowe was included in Atlanta Magazine’s Atlanta 500, highlighting Atlanta’s most powerful leaders.

Instant partnered with Randstad USA, enabling clients to use responsible earned wage access to provide thousands of workers with access to their wages in real time.

Kanarys partnered with the Neiman Marcus Group to improve their diversity, equity, and inclusion initiatives through data and transparency.

Things we 💛 about our Corporate Partners

#GreaterPossibilitiesTogether: Engage Board members, Ed Bastian, CEO Delta Air Lines and Marty Flanagan, CEO Invesco, recently talked about how to attract, keep and motivate talent. While their industries are very different, they both agreed that talent is core to what they do.

Goldman Sachs led a $25 million Series B for Wonderschool as part of its One Million Black Women initiative. 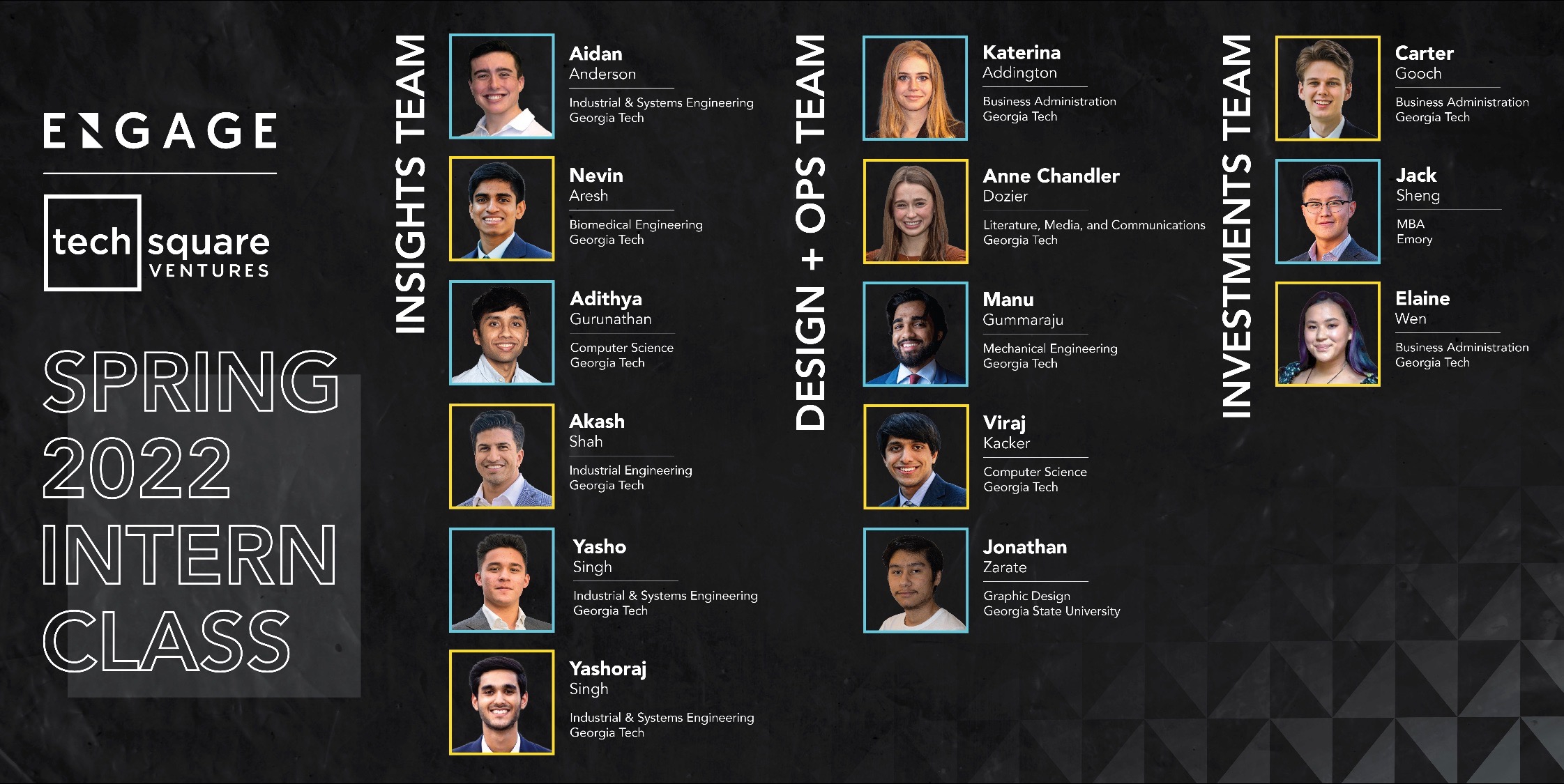 Engage and Tech Square Ventures are thrilled to welcome fourteen talented students as interns to our team this Spring. Engage’s internship program is part of our mission to bring hands-on educational opportunities and exposure to the startups and innovation ecosystem to more students in Atlanta.

These Georgia Institute of Technology, Georgia State University, and Emory University students will be taking on roles ranging from design and operations to investment and research.

Thank you all for joining us!

🏊 Dive into the ATL Ecosystem

UPS launched UPS Ignite and a partnership with the Russell Innovation Center for Entrepreneurs to elevate underrepresented founders and the businesses they lead in the United States through a $1.25 million investment from UPS and the UPS Foundation.

Georgia Power CEO Chris Womack was named to the Atlanta Magazine’s 2020 list of the city’s most powerful leaders .

Georgia startups raised more than $4 billion in 2021, doubling the amount raised in 2020 and setting a fundraising record for the state.

Georgia Tech broke into the top 20 in higher education research and development spending for the first time in a decade, according to the NSF.